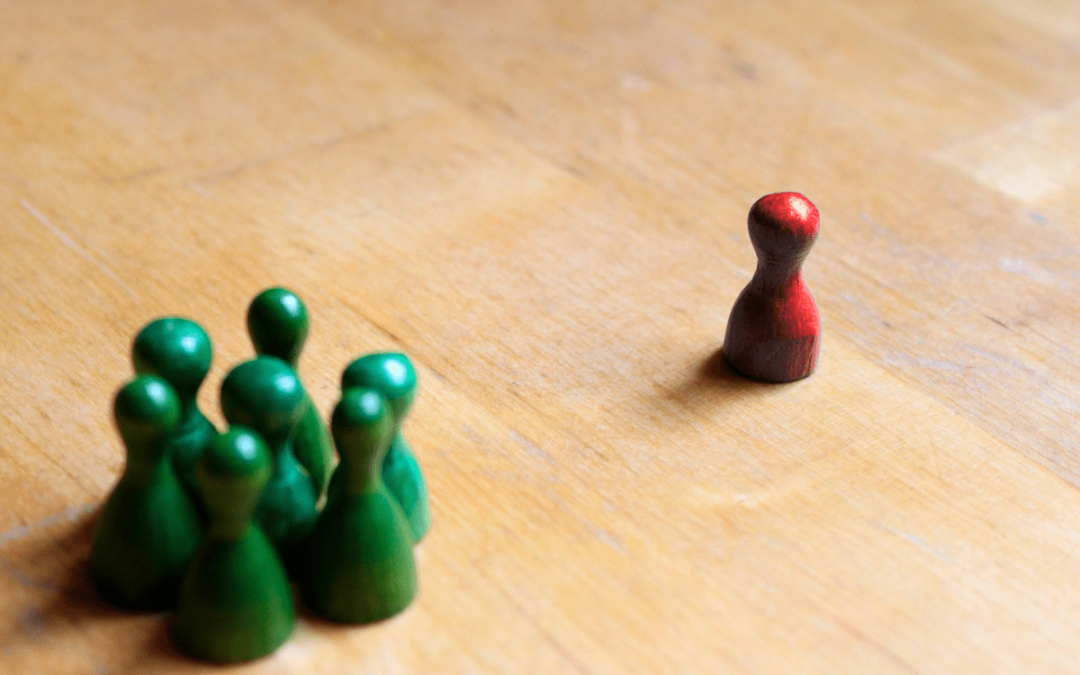 Belonging to a minority group can cause a lot of suffering. Most often this suffering comes from outside, from majority groups or from other minority groups. But the stress and suffering related to this status can also come from within. Low self-esteem, dysfunctional beliefs, repetition of toxic patterns, self-stigmatisation adds further suffering to the minority experience. It is interesting to understand how this mechanism works in order to better support people who suffer from it.

According to Kelly Moore and colleagues, self-stigma is the set of processes through which experienced stigma impacts on self-image.

It is a complex process made up of several components that feed on each other.

The first component is perceived stigma. It is one of the most important components, as it determines the degree of internalisation and anticipation of stigma.

Perceived stigma will then lead to stereotype adherence. The more the membership of a stigmatised group is linked to factors considered controllable (substance use, incarceration, etc.), the stronger the adherence to the negative values and beliefs of its stigma. They will be perceived as true, thus endangering the self-image.

If adherence to the stereotype has taken place, the stigmatised person will then have two choices: to distance their identity from that of their minority group, even if it means leaving part of their identity behind, in order to preserve their self-image, or to internalise the stigma and apply it to themselves, thus more easily putting in place behaviours in accordance with the stereotypes.

By doing so, they will gradually undermine their self-image and self-esteem, but also expect more stigmatisation. This is the fourth component of self-stigma: the anticipation of stigma. People who experience stigma will constantly expect and anticipate more stigma. This form of anxiety is a source of much stress and confirmation bias. The anticipation of stigma only needs the stigma to be perceived in order to occur, but it is also reinforced by the internalized stigma.

2. What is the impact of self-stigma?

Self-stigma is a particularly vicious process that has many negative consequences in the lives of those who suffer from it.

The first and most important of these is the stress it brings. People with high levels of self-stigma live in constant anticipation of negative experiences. This kind of stress has been correlated with a greater chance of developing an anxiety disorder, in this case social anxiety or generalised anxiety disorder, as well as a greater chance of developing a mood disorder.

This is particularly serious in the context of an internalized stigma surrounding a mental illness. There is a risk of refusing to engage in therapy or treatment in the belief that it will not help, that the mental condition will get worse and thus lead to even more severe disorders.

Furthermore, as mentioned above, the internalized stigma continuously degrades self-esteem and sense of self-efficacy, leading to a growing sense of helplessness and uselessness, another factor contributing to the development of anxiety disorders and withdrawal from the therapeutic process.

This has two consequences: the first is to cut oneself off from part of one’s identity and therefore never be able to express oneself fully, which can lead to strong frustration and a deterioration of one’s self-image.

The second consequence is social isolation. Where it is common to find a great deal of mutual aid and support between members of a stigmatised group, by moving away from that group, people who refuse to internalise the stigma often find themselves without a support group, and also away from the majority group which may exclude them because of their status. These people then find themselves in the middle of the road, “not” a minority enough to benefit from the protection of their group but “too” a minority to integrate into the rest of society. This isolation obviously has deleterious consequences for mental health.

3. Who is affected by self-stigma?

Any person who experiences some form of stigmatisation because of an internal or external characteristic can suffer from self-stigmatisation. However, certain minority groups are particularly affected, with consequences that are regularly documented in the literature. The following is a non-exhaustive list.

Racialised people: People who are not perceived as white or Caucasian often suffer from numerous social and institutional discriminations. Many racist and xenophobic stereotypes around crime in particular contribute to the self-stigmatisation of this group. It is important to note that, although not the only factor, such stereotypes can lead to self-fulfilling prophecies.

The LGBTQ+ community: People who are not heterosexual and cisgender (i.e. transgender people, whose gender does not correspond to the one assigned at birth) are subject to extremely violent discrimination and stigmatisation (and on the rise in France since 2013). Numerous stereotypes and preconceived ideas based on misogynistic beliefs build the stigmatised image of this community. The social isolation that self-stigmatisation can bring is particularly dangerous when we know that between 17 and 41% of young people in this community will be homeless in their lifetime.

People suffering from psychological disorders: Psychiatric disorders bring with them a great deal of suffering and difficulties intrinsic to the impact they have on the overall functioning of the individual. However, the perception and stigmatisation of mental health problems reinforces this suffering. The self-stigma associated with psychological disorders is linked to lower levels of perceived self-efficacy, self-esteem and poorer adherence to treatment and therapy, with the risk of the condition worsening or developing co-morbidities.

Formerly incarcerated people: A person sentenced to prison has about a 60% chance of reoffending on release, more than one in two. There are many factors behind this score and self-stigma is one of them. Self-stigma can lead to beliefs such as “once an offender, always an offender“, and through the internalisation of stigma, reinforce the identity of the offender or criminal in order to get closer to the group sharing the experience. Decreasing the sense of self-efficacy also runs the risk of decreasing reintegration efforts as no positive change is perceived as possible and perception biases reinforce these beliefs with every perceived negative interaction related to the experience of incarceration.

4. What can be done about self-stigmatisation?

It is important to identify populations at risk of self-stigma in order to assess it and provide appropriate treatment.

Cognitive and behavioural therapy would be an appropriate first line of treatment to change the patterns and beliefs associated with stigma and prevent future internalisation of stigma and adherence to stereotypes. People belonging to a minority group who do not adhere to discriminatory stereotypes have less risk associated with stigma. It will also be important to work on the anticipation of stigma as this may be based solely on perceived stigma. Work on perception bias will be important.

In addition to cognitive work, behavioural work is needed to overcome self-fulfilling prophecies and to maintain healthy behaviours that reinforce a good self-image and a sense of personal efficacy.

It is also important to encourage a person suffering from some form of stigma to find a support group that shares their experience, in order to form social protection and support.

Finally, when someone reports an experience of stigma to you, or you know that they are a member of a minority group, it is important to show high levels of caring and to ensure that you do not make judgements that could reinforce self-stigma.