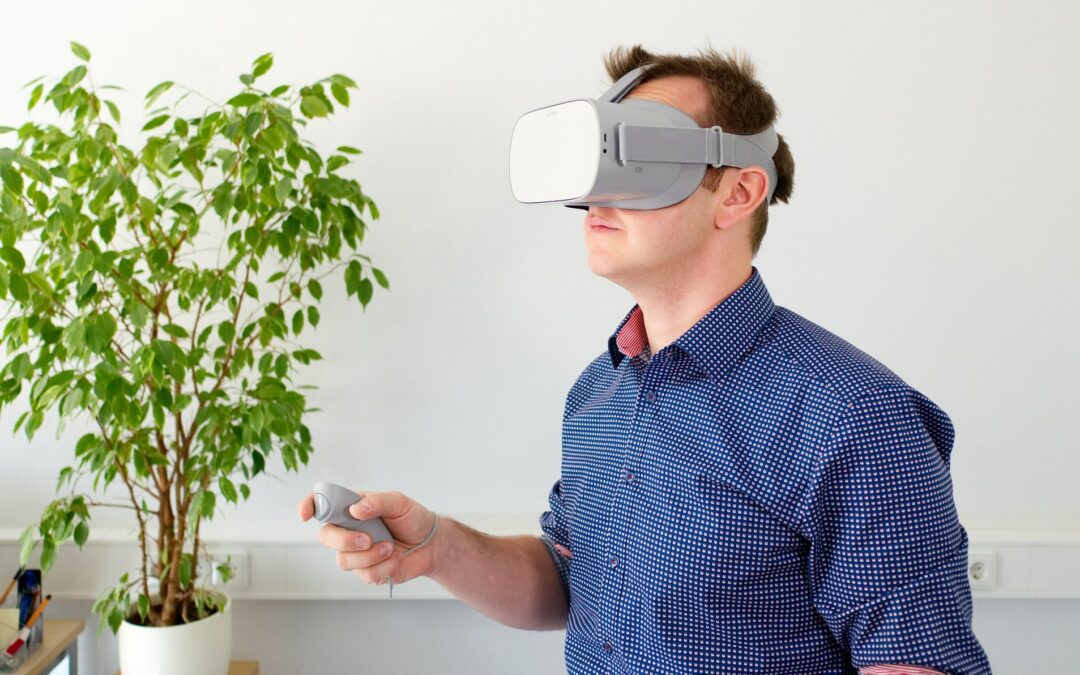 Virtual reality exposure therapies (VRET) are based on cognitive-behavioral therapies’ exposure principles. By receiving scientific validity, VRET are an alternative from imaginary or in vivo exposures. These types of therapies are made to take care of many mental pathologies : anxiety disorders, addictions, eating disorders… As brief therapies, VRET focuses on “here and now” to treat urgent clinical pictures and give to the patients a smart and efficient response to the severity of their pain.

The first VRET tests scientifically validated were in 1992. Atlanta Clark University have protocolized an in virtuo therapy on aviophobia’s treatment. Nowadays, cognitive-behavioral therapies (CBT) are rising, meanwhile virtual technologies increase in qualitative aspects and tend to create medical applications. CBT can now use a third exposure alternative : the in virtuo. Clinicians and researchers evaluate this technology’s therapeutic benefits in anxiety disorders’ treatments. There is a big success on specific phobias’ treatments.Therapeutic applications evolved also with new studies on post-traumatic stress disorders.Vietnam war’s veterans would be the first to get access to this technology.

Based on cognitive behavioral therapy exposure principles, Virtual Reality Exposure Therapies is an alternative to in vivo exposures. The patient who suffers from anxiety disorder, faces anxiety-provoking situations to create a habituation phenomenon. It is a real therapeutic success. VRET can also be used in other pathologies such as addictions or eating disorders. Patients are immersed in ecological environments but also work with virtual context processing dysfunctional thoughts and behaviors (craving, dysmorphophobia, non-realistic beliefs, cognitive distortions…).
Exposure lasts, on average, 30 to 40 minutes, and patients need around 8 sessions to see the anxiety response’s decreasement. VRET can integrate classical therapies to optimize therapeutic benefits.

Children, teenargers, adults and elderly people can be treated by Virtual Reality Exposure Therapies. However, some restrictions are applied on :

4. What are the risks linked to VRET ?

The only risk linked to virtual reality is cybersickness. It means that you have similar symptoms as travel sickness during or after the exposure. Cybersickness doesn’t have long term consequences and only touches around 10% of the patients.
However, be aware that VRET is only used as a therapeutic use.

5. What training is necessary to practice VRET

VRET are used by many different therapists : Psychiatrist, psychologist, psychotherapist… They also are employed by other healthcare professionals such as nurses, psychomotor specialists, sophrologists or even hypnotherapists.
Training is necessary to get to understand exposure principles in virtual reality. C2Care. C2Care offers training to get tools. However, therapists can be formed by other biais (events, e-learnings…).

6. What pathologies can be treated by VRET ?

Other disorders can be concerned as well with a treatment with virtual reality such as depression, neurocognitive disorders, schizophrenia and autism. Virtual reality is also used in relaxation and the pain treatment (during surgery or for chronic pain).

7. What are the virtual reality benefits ?

–Accessibility : Virtual reality compensates issues linked to in vivo exposition. This gives to the therapists and to the patients the possibility to have access to an almost-unlimited number of various environments directly from the therapist’s office.

–Safety: Environments within the patients are immersed are under the therapist’s control to avoid any undesirable event. Moreover patients are reassured by this type of exposure. Virtual reality gives a secure alternative for the patient and for the therapist during some potentially dangerous situations (such as amaxophobia for example).

– Confidentiality : Exposure can be directly realized in the therapist’s office.

– Cost reduction : Some disorders need expensive exposure, such as aviophobia. In vivo exposure requires exposing the patient to the key step of an aircraft’s journey. That is really expensive.

– Settings : Using virtual reality gives access to many impossible settings during in vivo exposures : changing the weather, increasing or decreasing people in the crowd or the traffic, creating turmoil or changing people’s facial expression

– Ludic aspect : Virtual reality makes people’s curious. As highlighted in different studies, the ludic aspect of VRET is liked by the users and optimize therapeutic engagement and care’s motivation.

8. What material is needed to practice VRET ?

– We have some compatible wireless headset such as Oculus Quest 2, Pico neo 2 & 3, Oculus Rift S, Hp Reverb G2. You can complete this material with any device coming from a web browser.

– For wire headsets you need a computer with these minimum characteristics : Core i5 9300H, 8go de Ram, a Gtx 1650 graphic card and with a display port.