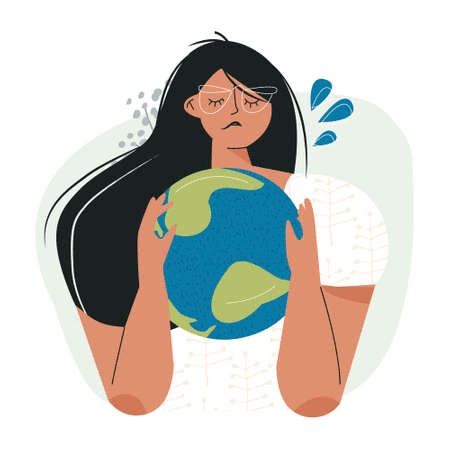 You may be wondering what the link is between climate change and mental health? After all, how can one impact the other?
The WHO (World Health Organisation) indicates that climate change represents a significant risk to mental health. In addition to impacting our planet, these changes will have an impact on anxiety, depression, violence and post-traumatic stress..

1. How can the climate impact our mental health?

The first people affected by this impact are those who have the most knowledge about climate change. Thus young people or people working in the climate environment are particularly affected by it.

You may have heard the terms eco-anxiety and solastalgia. The two terms are closely related, if not used in the same way. However, we can slightly differentiate one from the other.

Eco-anxiety is a term that has been used since the 1990s, while the concept of solastalgia arrived in 2003. Eco-anxiety can be defined as a suffering linked to the projection of global warming into the future and an anxiety linked to its evolution, its changes…

Somewhat on the same principle as eco-anxiety, solastalgia will mainly focus on the depressive symptoms generated by environmental/climatic changes.

As seen above, climate change has a significant impact on anxiety and depression. Thus, therapeutic support may be necessary to help people manage their anxiety-type emotions. To do this, virtual reality allows the patient to be exposed to situations that are anxiety-provoking or reminiscent of climatic problems. Then, during the exposures, the therapist provides the patient with tools to manage their emotions.

Post-traumatic stress in relation to the climate can be direct or anticipatory. Indeed, climate change is increasingly favouring climatic disasters (major fires, floods, heat waves, etc.), which can leave traumatic after-effects on people who have directly experienced them.

We can also find anticipation of the ecological disaster, which can itself favour the development of post-traumatic stress.

In the context of post-traumatic stress following various types of climatic disasters, for example, therapy by exposure to virtual reality will enable the patient to be immersed in some of these traumatic places. Of course, the exposure is done gradually. As in the case of anxiety treatment, the therapist will accompany the patient during these exposures in order to provide tools for managing emotions and working on catastrophic thoughts. The environments created by virtual reality are as close as possible to real environments to allow optimal exposure and management.

Perhaps when you read the title of “violence” you think, how can the climate impact on violence? Numerous studies have looked at the effect of high heat (or conversely high coolness). A meta-analysis by three researchers from the University of California at Berkeley showed that higher than normal temperatures increase the risk of interpersonal conflict by 4% and the risk of conflict between groups by 14%.

Perhaps you yourself have noticed that you are more sensitive and less patient when you are too hot or too cold?

Different therapies can be used to deal with anger/violence. In the context of emotion management, virtual reality will allow the patient to be exposed to relaxation situations. Thanks to the environments designed for relaxation, as well as the audios that accompany them, the therapist will accompany the patient in learning to manage his anger.

Previously we talked about depression in the context of solastalgia. This time we will discuss depression in relation to pollution.

Indeed, a British study carried out for more than 7 years on 13,000 people shows a link between air pollution and an increase in the number of depressions. This same study shows a link with pollutants and an increase in anxiety and the risk of developing psychiatric pathologies such as schizophrenia. The researchers in the study explain that pollutants have significant inflammatory effects that promote psychotic and mood disorders.

In this pursuit, studies show an increase in the risk and number of suicides in connection with the increase in temperature.

Virtual reality also has its place in the treatment of climate-related depression. Indeed, virtual reality will allow the use of environments in the framework of relaxation/meditation. Thus, patients will be immersed in virtual worlds, which are ideal supports for learning relaxation, breathing techniques, letting go, etc. It will also allow us to work on behavioural activation, by allowing the patient to re-expose himself through virtual reality to different situations that are pleasant for him.

What do medicines have to do with the climate?

Some medicines can aggravate symptoms that can occur in hot weather, such as dehydration. Indeed, these medicines can act on the regulation of body temperature. As we have just seen, the hotter people are, the greater the impact on anxiety, depression, violence, etc.

Thus, with the increase in temperature, it will be necessary to think about readjusting the prescribed drug treatments.

In addition, some medicines can be altered by heat (such as liquids, suppositories, creams, etc.). Other medicines such as capsules, powders, etc. may also deteriorate over time.

Here are some examples of the impact of climate on the mental health of individuals. As you will have understood, the consequences related to the climate lead to a new therapeutic approach. More and more people need to have this moment of listening, of exchange on their worries, emotions… It is thus important to accompany people in order to help them to manage them and to feel better in their daily life!